What do webhooks do in Discord?Where can I find Discord webhooks?

How do I add a webhook to Discord?Discord webhook example

How to Get Started with Discord Webhooks

Discord is a digital platform that allows its users to engage in both voice and text-based conversations. Discord also gives users the power to share media and organize conversations into different channels based on privacy and the members involved. Some of the conversations in Discord involve external applications and services, thereby the ability to bring information from these external systems into Discord channels is of great service to its users. This is where Discord webhooks come in, as they are an HTTP-based communication technology that allows external applications to send information into Discord channels.

In this article, you will be introduced to Discord webhooks, what they do, how they operate, and how to set one up quickly. We will also look at an example use case and try to answer common questions developers ask when they start working with webhooks in Discord.

What do webhooks do in Discord?

This helps enhance the quality of conversations in Discord, as more information can be brought in through integration with numerous external sources using the technology of Discord webhooks.

Let's say, for example, that a finance team uses Discord for conversations and would like to have their daily sales summary records posted to their Discord channel at the end of each business day. These records may reside in a custom accounting application or a payment/subscription management SaaS application, like Chargebee, that supports sending out information using webhooks. The team can then set up automated messages from these external sources to be posted to their Discord channel using Discord webhooks.

The only compulsory property in a webhook payload is the content property, whose value is the textual message to be posted in the channel. Note that only text-based Discord channels support webhooks. Voice channels in Discord cannot use webhooks.

You can also upload files, embed objects, and add attachments to the message sent to the Discord channel.

For details on how to send a message into a Discord channel using a Discord webhook, click here.

Getting Started with GitHub Webhooks

Learn what is the difference between GitHub Webhook and Actions as well as how to get started with GitHub webhooks to start integrating GitHub into external workflows and applications.

Getting Started with Shopify Webhooks Guide

Getting started with CircleCI webhooks

Where can I find Discord webhooks?

Discord webhooks are a component of Discord servers. Thus, every webhook is scoped to a particular server and is connected to a channel that resides on that server. This helps you to organize your webhooks based on their purpose.

To find the webhooks that belong to a server, go to the server settings page by clicking the down arrow beside the server name to open the server's context menu, as shown below: 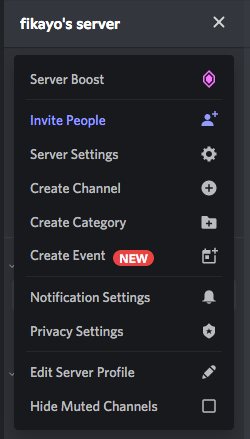 Click Server Settings and go to Integrations on the side menu. There, you can see your webhooks and create new webhooks. 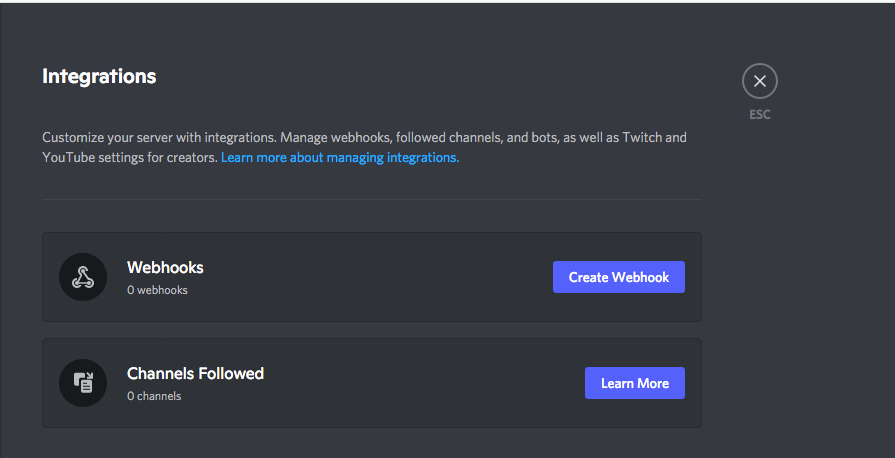 How do I add a webhook to Discord?

To add a webhook to your Discord server, follow the steps listed below: 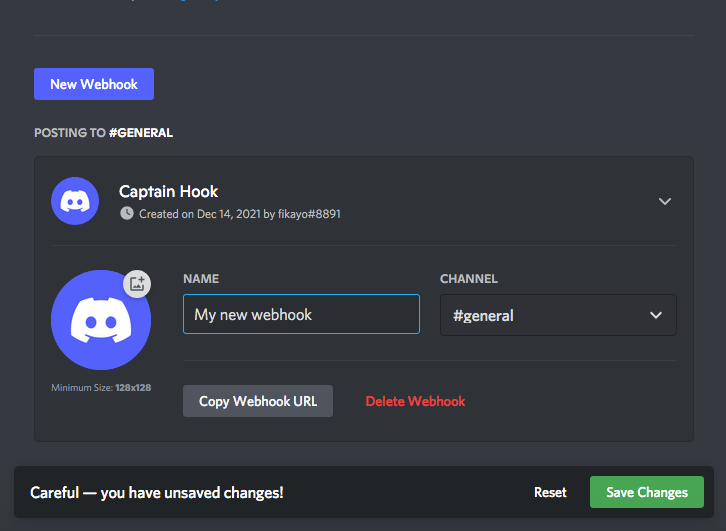 That's all! You now have a webhook added to your server in order to send messages to the channel you have selected. Click Copy Webhook URL to get your webhook URL and use it to send messages from external applications into your Discord channel.

If you wish to use the API to create and manage your Discord webhooks, you can check out this detailed tutorial.

Tutorial: How to Configure Discord Webhooks Using the API

Learn how to use Discord's API to create a webhook integration. Follow a step-by-step tutorial of an example where we set up a Discord bot to receive notification from GitHub.

In this section, we will take a look at a common use case for Discord webhooks amongst application developers. Developers manage their code using version controls systems (VCS) like Git, and by collaborating with other developers through cloud remote repository providers like GitHub.

In a team setting, the developers on the team often push code to the same remote repository to update the codebase. If the team uses Discord for communication, it can be very useful to get real-time updates in the team's Discord channel when a developer pushes a new update to the codebase on GitHub. This is where Discord webhooks come in.

Through the following steps, the team can set up a communication channel between GitHub and Discord to receive updates in the team's Discord channel when a new update is pushed. 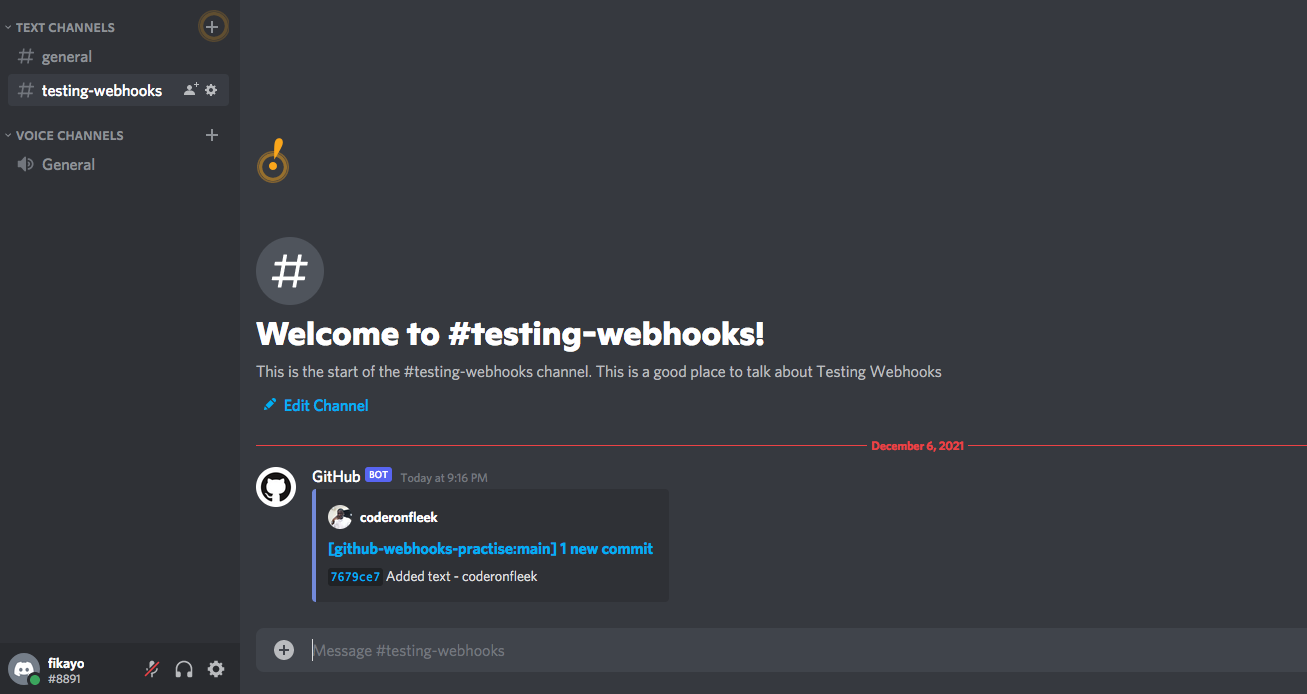 For a detailed tutorial on this use case, check out this article.

Tutorial: How to Configure Discord Webhooks Using the Admin Interface

Learn how to create, edit, and delete a discord webhook using the Settings page with the help of an example detailed step-by-step

In this section, I have curated a few commonly asked questions about Discord webhooks. If your questions are not covered here, I encourage you to check out the official Discord webhooks introduction page and developer documentation.

In this article, we have been able to dip our toes into the world of Discord webhooks. Discord webhooks provide a way for developers to extend the platform by integrating it with external applications. The integration process is so flexible that any application capable of sending an HTTP request can integrate with Discord. This gives multiple applications the ability to communicate with the platform, and helps users collaborate better.

Tutorial: How to Configure Discord Webhooks Using the Admin Interface

Learn how to create, edit, and delete a discord webhook using the Settings page with the help of an example detailed step-by-step

Tutorial: How to Configure Discord Webhooks Using the API

Learn how to use Discord's API to create a webhook integration. Follow a step-by-step tutorial of an example where we set up a Discord bot to receive notification from GitHub.