Because there may not be a second chance to receive a webhook (and even retry systems have limits), the webhook consumption system must be well tested so that it can process the requests without errors.

You also need to ensure that your servers are tested to determine how much load they can handle and how the webhook processing performance can be improved. Testing enables you to make the proper decisions in order to scale your infrastructure to meet the demands of your webhooks.

What are unit tests?

Let's assume your webhook endpoint handler contains a function that checks for a database record or performs authentication; you want to test said function in a unit test to ensure that it performs as expected.

How to perform unit tests

Details on how to perform unit tests for different codebases are available on their respective testing library documentations.

Some of the tests you will want to perform in unit tests are:

Functional testing is the type of testing that helps you check the entire behavior of your code. Simply put, it tests the sum of the parts. Let's assume you have a webhook endpoint that receives a payment notification and issues a ticket to the customer. This webhook endpoint would most likely do the following:

This operation would involve calling a bunch of functions (which we assume you have tested in your unit tests). Functional tests help you check that your endpoint performed all these operations successfully and the expected effect, ticket entry and email to the customer, takes place.

Webhook URLs are endpoints on your application's API. Testing a webhook URL requires a setup that can send mock requests to the endpoint and check the output for the expected result(s).

Just like unit tests, the way you write functional tests in your codebase and the libraries required is specific to the programming language/framework you're working in. For example, supertest is a Node.js library that can be used to test APIs by sending mock requests and checking the outcome.

If you want an API testing framework that can be used for any codebase, then the Postman test suite is highly recommended. Postman has an industry-standard automated testing suite for running tests against your webhook endpoint whether in development, staging, or production environments.

In Postman, you can use your webhook endpoint to build collections mocking different scenarios (success, failure, invalid data, etc.), and write tests for each use case. 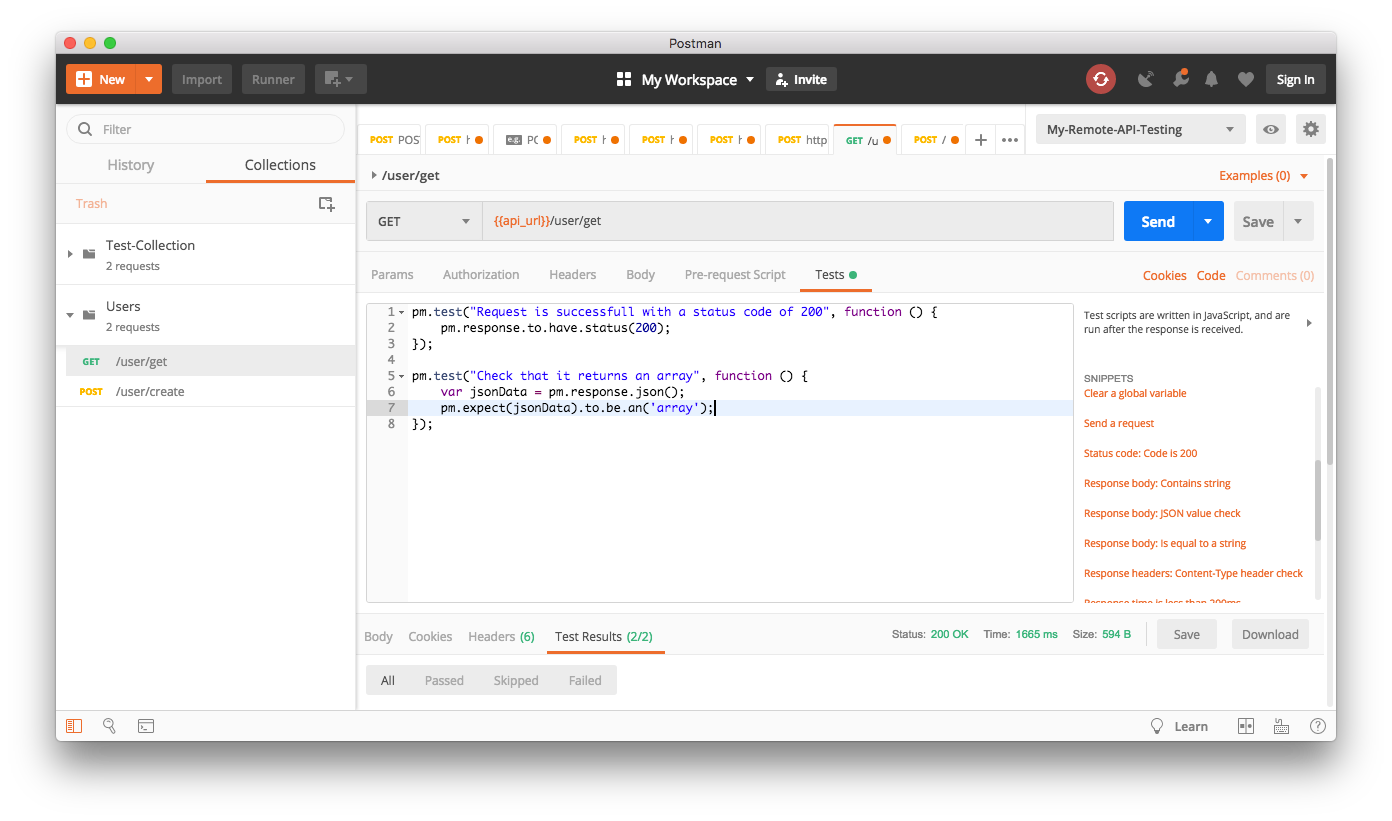 Postman tests can be run locally, or automated in a CI/CD pipeline using Postman's command-line utility (Newman) as shown below: 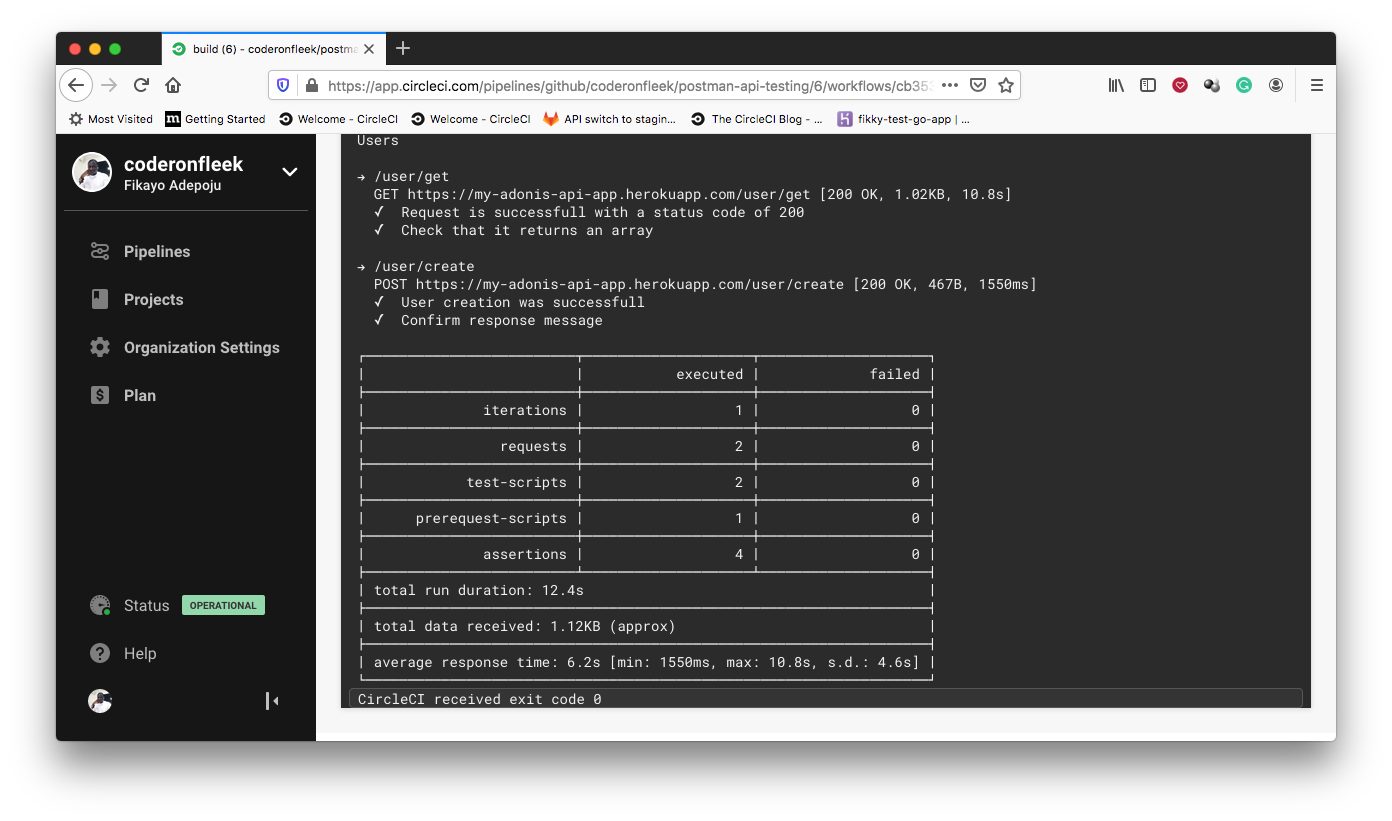 Benefits of functional tests on webhooks

How to Implement Webhook Idempotency

Learn what causes data integrity issues when working with webhooks and what are the preventive, and corrective strategies to solve them.

Load testing is the practice of putting your application under the pressure of network traffic to determine how many requests it can process within a given time without dropping a single one.

Load tests are very essential for applications that need to process a lot of webhooks, as they help you make informed decisions about scaling your application as your traffic grows.

How to load test your webhooks

One of the most used utilities for performing load tests is Apache Benchmark (AB for short). AB is a command-line utility that enables you to run a specified number of requests (hundreds, thousands, etc.) against an API endpoint.

You can specify the number of requests to be fired, the concurrency level, and also the payload.

Some of the information that AB gives you after it completes the requests includes:

Below is an example of the report from running AB on an endpoint: 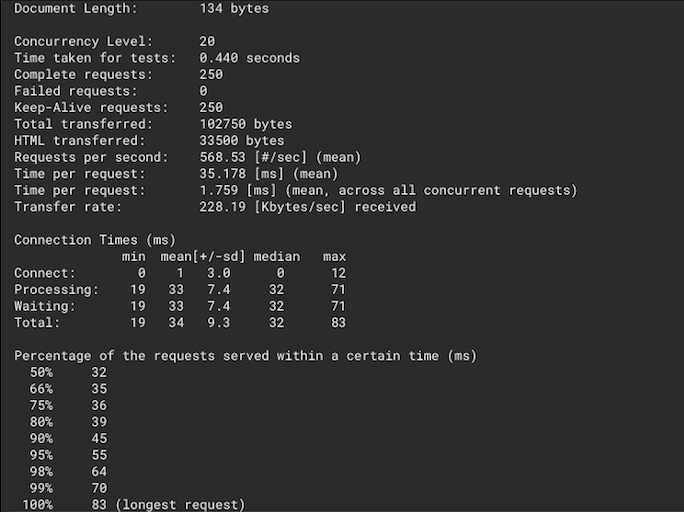 This is all useful information for engineers looking to scale their webhook infrastructure.

If you want a more specialized load testing tool to cover more use cases, you can check out K6, JMeter (also by Apache), and Gatling.

These bottlenecks could be due to long-running functions (cryptographic functions, hashing functions, etc.) in the call stack causing the webhook operation to be slow.

How to profile webhook code

Profiling is done by using a profiler. A profiler is a tool that measures how some piece of code consumes system resources at runtime. The profiler helps you find performance bottlenecks and understand the code's behavior.

When a profiler is active, you need to run the code to get results. For example, you can send a series of requests to the webhook URL while the profiler is watching, then collate results once the requests are complete.

Profilers are mostly directly related to programming languages, however some profilers now exist that support different languages. Node.js has a built-in profiler that can be used alongside Apache Benchmark. An example of a multi-language profiler is Blackfire, which currently supports Go, PHP, and Python.

Reports from profilers show you how much of your resources are being consumed and which code in the call stack is consuming them. This provides data on functions that need to be optimized for better performance.

One of the reports profilers can provide is Flame graphs. A Flame graph is a call stack visualization in the form of a flame that uses color densities to depict "hot zones" in CPU usage. Below is an example of a Flame graph: 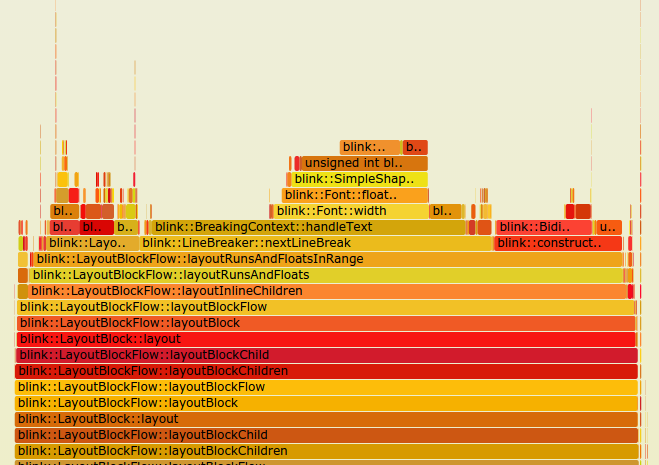 Each horizontal bar represents an operation in the call stack; the length of the bar indicates the time it takes the code to execute. The longer the bar, the more time code execution takes, which can be a good indicator of where performance improvement is needed. The density of the colors indicates how CPU-intensive the operation is, which is another indication of where performance optimization is required.

Testing is a very powerful engineering practice that helps build stable codebases and boost reliability. However, understanding the benefits of testing is the best way to be convinced to make it part of your development workflow. In this article, we have looked at how to test our webhooks for reliability, and the loads of benefits that come with it.

Testing webhooks helps you build highly reliable and performant webhooks which gives you more confidence and fewer bugs to fix.